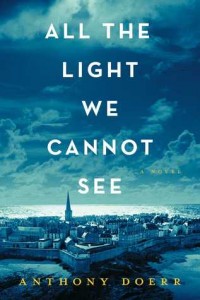 Back in December, I was number 12 on the hold list for this book. When I got it, just before leaving for our Christmas travels, I forgot to check it out until my hold has expired. Why yes, I do work at the library, why do you ask? So, I shuffled it along the holds queue to the next person in line, thinking I’d try again later when the hype over this book had subsided. So I waited until February. When I was number 26 on the hold list. When it finally arrived a month later, I was a little hesitant. I am always reluctant to read “the book that everyone else is reading,” because I’m afraid it won’t live up to the hype. So, the question is, was it worth the wait?

I always like books that have multiple story lines going on that begin separately, but then connect. I enjoyed both the story of Werner, an orphan growing up in a German mining town, who teaches himself to put together and fix radios, and the story of Marie-Laure, who grows up in Paris. Her father is the master of locks at the Museum of Natural History. Marie-Laure goes blind as a child, and her father builds her a model of their neighborhood so that she can independently navigate her way home. The story takes place during World War II, another reason I was hesitant about this book. I read for relaxation before falling asleep, so stories about difficult and depressing themes aren’t always my first choice. I am glad I stuck with this one.

I was struck by the differences and similarities between these two main characters. Marie-Laure is strong and determined, and makes things happen. Her father equipped her to be strong and pretty self-sufficient as a blind person. Marie-Laure saves herself from a menacing German officer, helps transmit information to Allied forces, and even gets her great uncle to leave the house after many years spent inside. Meanwhile, Werner lets things happen to him. He ends up serving in the German armed forces, though he detests killing and violence. He is estranged from his sister in his quest to do what is expected of him. Both Werner and Marie-Laure are curious about science and the natural world. Werner discovers a science-themed radio program he loves to listen to with his sister (much like my own love for Bill Nye the Science Guy). Also, I loved Marie-Laure’s interest and joy in snails and other marine animals. A girl after my own heart!

I also appreciated the book’s short chapters, which made it easy to find stopping places. The book switched stories between chapters, which kept me on my toes, but also led to me having to flip back to recall events that had happened earlier. Overall, I was entranced by the book and was sad when it was over. I am happy to say that this book does hold up to its hype.

Have you read anything recently that held up to all the hype about it?